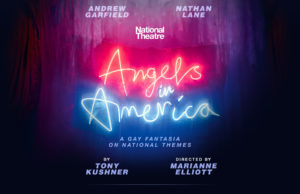 The revival of Tony Kushner’s Angels in America opened on March 25, 2018 to rave reviews! This is the 25th anniversary production of this two-part, seven-and-a-half-hour multi-award-winning masterwork starring Andrew Garfield and Nathan Lane in career-high performances.

Returning to Broadway for the first time since its now-legendary original production opened in 1993, this spectacular new staging of Part One of Angels in America, Millennium Approaches, and of Part Two, Perestroika, directed by Marianne Elliott, had its world premiere earlier this year in a sold-out run at the London National Theatre, where it became the fastest selling show in the organization’s history.

As politically incendiary as any play in the American canon, Angels in America also manages to be hilariously irreverent and heartbreakingly humane. It is also astonishingly relevant, speaking every bit as urgently to our anxious times as it did to the early ’90s. Tackling Reaganism, McCarthyism, immigration, religion, climate change, and AIDS against the backdrop of New York City in the mid-1980s, no contemporary drama has succeeded so indisputably with so ambitious a scope.

For more information and to purchase tickets, please click here. 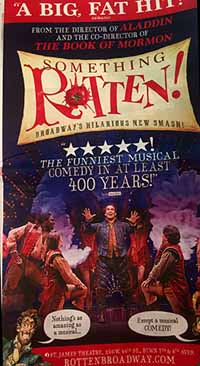 From the co-director of “The Book of Mormon” and the producer of “Avenue Q”, comes something original… something fresh… Something Rotten!

A world-premiere musical comedy about the musical comedy that started it all. Welcome to the ’90s – the 1590s – long before the dawn of premium tickets, star casting and reminders to turn off your cell phones. Brothers Nick and Nigel Bottom are desperate to write a hit play but are stuck in the shadow of that Renaissance rock-star known as “The Bard.”

When a local soothsayer foretells that the future of theatre involves singing, dancing and acting at the same time, Nick and Nigel set out to write the world’s very first MUSICAL! But amidst the scandalous excitement of Opening Night, the Bottom Brothers realize that reaching the top means being true to thine own self… and all that jazz.

With its heart on its ruffled sleeve and sequins in its soul, SOMETHING ROTTEN! is an uproarious dose of pure Broadway fun and an irresistible ode to musicals – those dazzling creations that entertain us, inspire us and remind us that everything’s better with an exclamation point!

For more information and /or to purchase tickets, please go to www.rottenbroadway.com 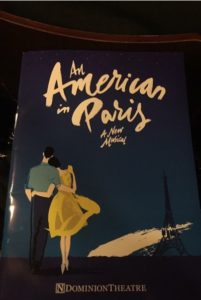 AN AMERICAN IN PARIS had its spectacular opening night in London’s West End on March 21, 2017.

LONDON EVENING STANDARD, METRO, THE DAILY TELEGRAPH, THE INDEPENDENT, THE ARTS DESK, LONDONTHEATRE1.COM, THE HOLLYWOOD NEWS, MusicOMH.COM, and THE UPCOMING.COM

AN AMERICAN IN PARIS is a musical based on the Academy Award Winning movie directed/choreographed by world renowned ballet choreographer, Christopher Wheeldon. It was first seen in 2014 at the Chatelet du Theatre, Paris, France, to RAVE reviews as well as RAVE reviews on BROADWAY.

For more information and/or to purchase tickets, please go to https://www.anamericaninparisthemusical.co.uk/ 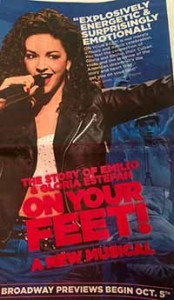 The new hit Broadway musical about life story of GLORIA and EMILIO ESTEFAN.

ON YOUR FEET! is a true audience pleaser – a love story about two people who believed in their talent, their music and in each other, and fighting against all odds became an INTERNATIONAL sensation.

ON YOUR FEET! is a happy, inspirational musical that will have audiences laughing, crying and on their feet dancing for sheer joy!

ON YOUR FEET! is a rags to riches story that everyone can relate to including some of the most iconic songs of the past quarter century including “The Rhythm Is Gonna Get You”, “Conga”, “Get On Your Feet”, “Don’t Want To Lose You”, “1-2-3”, and “Coming Out Of The Dark”, among many other favorites as well as new songs that have been written for this show.

ON YOUR FEET! boasts a creative team to match its incomparable song list, two-time Tony Award winner Jerry Mitchell (KINKY BOOTS) directs a cast of 20 with choreography by four-time Drama Desk nominee Sergio Trujillo (JERSEY BOYS) and an original book by Academy Award Winner Alex Dinelaris (BIRDMAN). In addition, band members of the original Miami Sound Machine will be playing with our show’s orchestra.
Here are some of the RAVE reviews:

For more information or to purchase tickets, please go to  www.onyourfeetmusical.com

AN AMERICAN IN PARIS 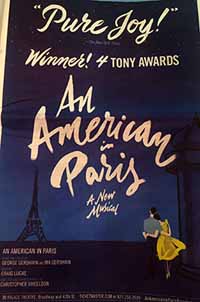 “AN AMERICAN IN PARIS” A new musical based on the Academy Award Winning movie directed/choreographed by world renowned ballet choreographer, Christopher Wheeldon. World premiere at the Chatelet du Theatre, Paris, France, to RAVE reviews as well as RAVE reviews on BROADWAY:

For more information and/or to purchase tickets, please go to www.anamericaninparisbroadway.com