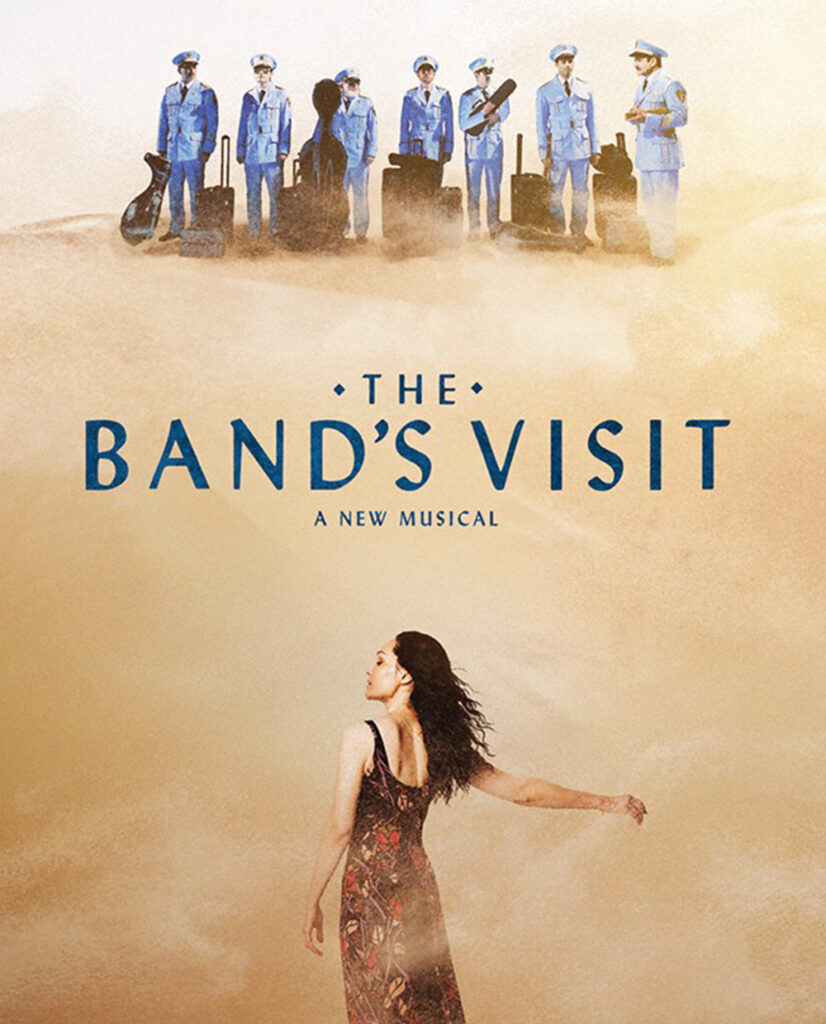 The Band’s Visit is based on Eran Kolirin’s 2007 film about an Egyptian Police Band that arrives in Israel to play a concert. Under the spell of the desert sky, their lives become intertwined with the locals in the most unexpected ways.

Tickets for the National Tour are now on sale. For more information and to purchase tickets, please click here.

“ONE OF THE MOST RAVISHING MUSICALS YOU WILL EVER BE SEDUCED BY OPENED ON THURSDAY NIGHT AT THE BARRYMORE THEATER. IT IS CALLED ‘THE BAND’S VISIT.’ Directed by DAVID CROMER with an inspired inventiveness that never calls attention to itself, ‘The Band’s Visit’ flows with the grave and joyful insistence of life itself. All it asks is that you be quiet enough to hear the music in the murmurs, whispers and silences of human existence at its most mundane – and transcendent.” – Ben Brantley, The New York Times

“DAVID YAZBEK’s melody matches the exquisitely uncertain certainty of the lyrics. That ‘something different’ is the heart-clutching sensation that throbs throughout this miraculous show, as precise as it is elusive, and all the more poignant for being both.” – Ben Brantley, The New York Times

“TONY SHALHOUB HAS POSSIBLY NEVER BEEN BETTER.” – David Rooney, The Hollywood Reporter
“THE BEST MUSICAL OF THE YEAR HAS MADE IT TO BROADWAY. ‘The Band’s Visit’; shows that the great American art form (give or take jazz) is still full of life when practiced by artists who trust the taste and intelligence of their audiences.” – Terry Teachout, The Wall Street Journal

“THIS IS A REMARKABLE AND BOUNDLESSLY COMPASSIONATE AND HUMANISTIC PIECE OF THEATER.” – Chris Jones, Chicago Tribune
“ITAMAR MOSES, one of our best playwrights, has translated the screenplay of ‘The Band’s Visit’ into musical-comedy terms with quiet skill. Mr. Yazbek’s songs are a savory multicultural mixture of Egyptian pop music, Israeli klezmer and cool American jazz, one so fresh-sounding that you can scarcely believe they’re being sung on a Broadway stage. His lyrics are just as good.” – Terry Teachout, The Wall Street Journal
“A BEAUTIFUL PIECE OF THEATER. In both form and content, the show gave me more hope for what Broadway might welcome, might foster, might become than any musical in a long time.” – Sara Holdren, New York Magazine
“FEED YOUR SOUL: GO SEE ‘THE BAND’S VISIT.’” – Jeremy Gerard, Deadline
“Moses and Yazbek have created something rare, grown-up and special. The book packs warmth, wit and economy. Irresistible songs blend strains of Arabic and Israeli melodies and flecks of jazz. Onstage musicians showcase the music to the max.” – Joe Dziemianowicz, New York Daily News
“★★★★ FOUR STARS! ‘The Band’s Visit,’ which feels even richer on Broadway than in its award-winning 2016 run at the Atlantic, is unconventionally wise. It is rare to encounter a show that has such a graceful sense of time.” -Adam Feldman, Time Out New York
“★★★★ FOUR STARS! An urgent, realistic and relatable portrait of vulnerable individuals from different cultures who are able to make an unexpected human connection. I doubt that a better written new musical will come to Broadway”  -Matt Windman, AM New York
Time Magazine ranked The Band’s Visit among “The Top Plays and Musicals of 2017!” See the article by clicking here.
The Band’s Visit won TOP HONORS for Best Musical at the 2017 Lucille Lortel Awards, Outer Critics Circle Awards, New York Drama Critics’ Circle Awards and Obie Awards.